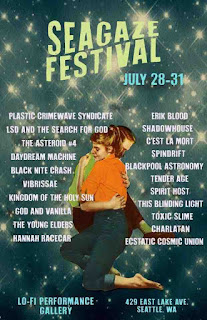 Seagaze Festival to take over Seattle from July 28 through 31st
While Seattle has a tradition for various psych rock-oriented festivals in the last few years, this week brings Seagaze - a festival with a slight twist. Organized by Blackpool Astronomy guitarist Jeff McCollough, Seagaze is an ambitious four-night spread that focuses on the intersection of psychedelia, shoegaze, and post-punk and psych rock.

The Seagaze Festival is an intimate event that goes against the ideas much of the larger, more commercial music festivals - with high quality grassroots talent, involving bands from afar as well as brilliant homegrown talent. Since its creation earlier this year it has spread its belief in uniquely cozy eclectic performances that offer patrons a much more intense and beautiful experience.

From July 28th through 31st, the Seagaze Festival 2016 takes over theLo-Fi Performance Gallery with four whole days of experimental free-wave weirdos blasting out awesome electic music. Doors at 8pm every day and performances until nearly 2am. Event sponsors include DKFM, Saint Marie Records, Sonophone Records, and APATICO. The event will be heavily covered by KEXP, among others.

TICKETS AND PASSES: Advanced tickets are available throughStranger Tickets. Patrons can purchase a 4-day pass for $35, which allows them entry to all shows at the festival. If they wish to buy an advanced ticket they will be $10 presale and $12 at the door for all night except the Thursday opening night show, which will be $8 presale, and $10 at the door.
VENUE ADDRESS: Lo-Fi Performance Gallery 429 Eastlake Ave East Seattle, Washington (both rooms)
AGE RESTRICTION: 21 and over only
DOORS: 8:00pm